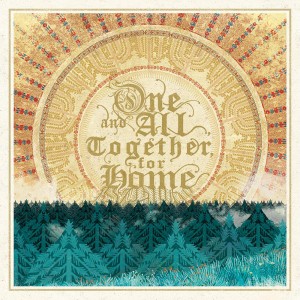 Various Artists – “One And All, Together, For Home”

Beautifully packaged on both CD and Vinyl versions, a collection of bands delve into their nation’s musical cultural heritage and produce music generally not associated with their ‘regular’ output.  The idea was born from Roman Saenko (Hate Forest, Drudkh, Old Silver Key, Rattenfanger and others!) and Drudkh feature with 2 tracks based on Ukrainian folk songs.

Primordial weigh in with 2 stunners, perhaps unsurprisingly, “The Foggy Dew” and  Alan ‘Nemtheanga’ Averill produces a particularly emotional rendition of “Dark Horse On The Wind” by Liam Weldon.

The album is full of a variety of takes on ‘folk’ with some bands mixing their black metal trademark with traditional pieces, Haive pull this off really effectively on their tracks as do Kampfar.  Ava Inferni bring Portugese folk and metal together with some stunning acoustic guitar on their track ‘Ao Teu Lado’.

Ultimately a really collectable (the cd’s are limited to 2000) musical homage from each artist to their countries folk roots which in itself must be celebrated and all in all if you love folk metal you are going to be playing this again and again.