“Inform – Educate – Entertain”.  Not many bands lay claim to such a mission statement but 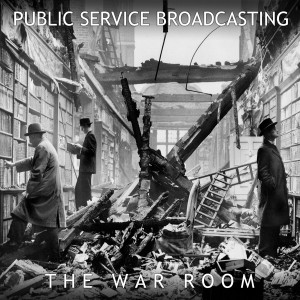 then not many bands are Public Service Broadcasting.

A two piece band who weld live instrumentation and Electronica around Public Information Films, archive footage and propaganda material to bring stories and events of the past to life.

Debut EP, “The War Room” uses such techniques brings to life the outbreak of World War 2 on Britain to startling dramatic effect, opening with “If War Should Come”.  A slow pulsating rhythm slowly builds while select passages form the public service film of the same name provided tips in case of war, the track builds to a crescendo before fading away to Neville Chamberlain’s address of “This country is at war”.

It is followed by the more bombastic propaganda reels of “London Can Take It” (Blitz) “Spitfire” and “Dig For Victory”, before closing with the more sombre “Waltz For George” (Dunkirk).  I will be intrigued to see if they take the concept idea further but for the début album they have gone for individual tracks/themes.

The question is, will format work as well without a singular concept to tie it together?  In short… Yes when they select the right material to work with.

Opening track “Inform – Educate – Entertain” is an unusual way to open an album as it’s a highlights reel of what is to come,  “Spitfire” from “The War Room EP” makes it to the opening track and although can feel somewhat cheesy out of context is still effective tune.

“Signal 30” shows what can be achieved on an individual basis and is the perfect starting point for new arrivals as high tempo guitar and drums thunder along without pause around messages about the dangers of speeding.

The rest of the album covers such wide ranging concepts at Royal Mail (“Night Mail”), Advent of TV (“Roygbiv”), Youth Fashion (“Now Generation”) and the first ascent of Everest (“Everest”) to the backing track of predominantly laid back Electronica with occasional Rock flourishes.

It takes several listens and minor research to understand each track affectively but I guess that is the point, after all: “Inform – Educate – Entertain”.